Our roadways and other civil structures are constantly under attack from moisture causing premature deterioration in both paved and unpaved applications. This leads to costly maintenance, or worse, complete reconstruction. Using Mirafi H2Ri in roadway designs can help to reduce the moisture content in moisture-sensitive soils throughout the life of the structure. In this blog post, you will learn why Mirafi® H2Ri is the ultimate integrated geosynthetic for subgrade stabilization in environments with moisture-sensitive soils, including expansive soils. 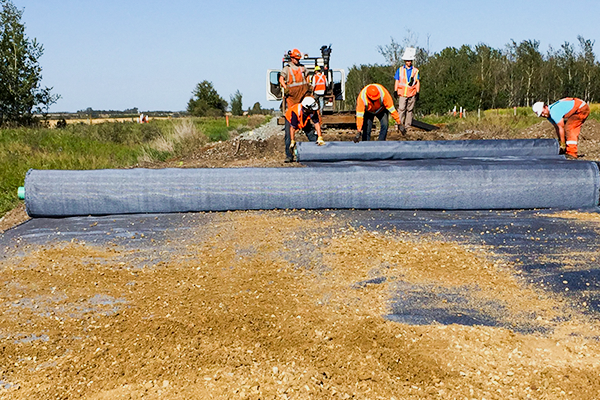 Mirafi H2Ri is a highly engineered woven geosynthetic that incorporates a water-wicking component that provides continuous moisture management and enhanced lateral drainage of soil and aggregate materials. Its unique structure stabilizes roadways while continuously removing water in saturated and unsaturated soils. It is the only geosynthetic in the world that removes water in unsaturated conditions. Mirafi H2Ri can lower the moisture content of the subgrade, which can increase its strength/modulus by more than 50 percent.

Water enters roadways through shoulders, existing cracks, and capillary action. Mirafi H2Ri provides a unique combination of mechanical and hydraulic stabilization to roadways and civil structures. Not only does Mirafi H2Ri provide the separation, filtration and reinforcement functions necessary to stabilize the structure, it also removes the greatest enemy known to roadways: water!


Mirafi H2Ri’s rough surface produces a higher friction coefficient than traditional geotextiles to provide enhanced confinement capabilities for aggregate. The geotextile’s high tensile strength also contributes to its ability to reinforce subgrade and base material. Combine these attributes with Mirafi H2Ri’s ability to wick water along its plane, while providing separation between aggregate and subgrade materials, and you are left with a highly capable geosynthetic that should be considered in any load support application. 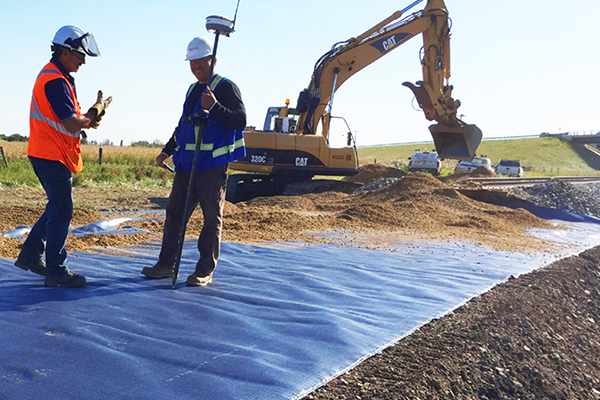 Mirafi H2Ri is created from high-tenacity polypropylene filaments and patented moisture management filaments to enhance drainage along the plane of the geosynthetic. These yarns are formed into an innovative weave structure to provide superior reinforcement strength and soil interaction integrated with wicking capabilities.Mirafi H2Ri is the first and only geosynthetic with the ability to drain water without relying on gravity. This marks a significant advancement in drainage applications and provides the first geotextile that can drain soils in unsaturated conditions.

Mirafi H2Ri is the only geosynthetic solution that provides continuous moisture management and enhanced lateral drainage of soil and aggregate materials in addition to providing the conventional functions of separation, filtration, reinforcement, and confinement. It has the unique ability to remove water in unsaturated conditions while providing the separation and filtration functions of a nonwoven geotextile and the reinforcement and confinement functions of a geogrid. No other combination of geosynthetics can accomplish what it does, as well as it does. 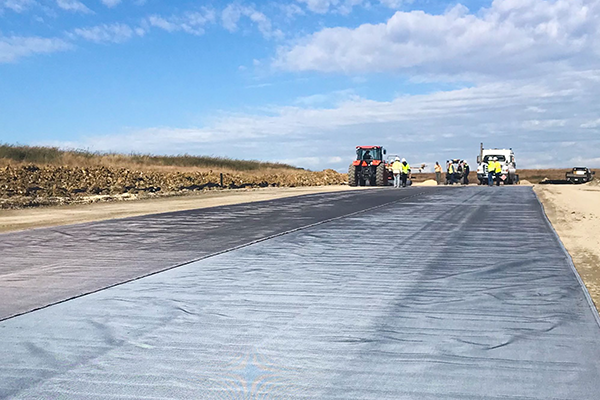 Mirafi H2Ri is placed directly on a prepared subgrade and rolled out flat. It is important to roll the geosynthetic in the direction of travel, so that the machine direction (i.e. long axis) of the roll is parallel with the planned direction of traffic. The flow direction of the water is marked on the packaging of each roll. Adjacent rolls of Mirafi H2Ri should be overlapped by 12” to 36”, depending on the subgrade strength. The geotextile can be cut with a standard utility knife.

Moisture is always involved in load support applications, making Mirafi H2Ri a suitable solution for a wide array of applications. Mirafi H2Ri makes the difference for varying application needs including: 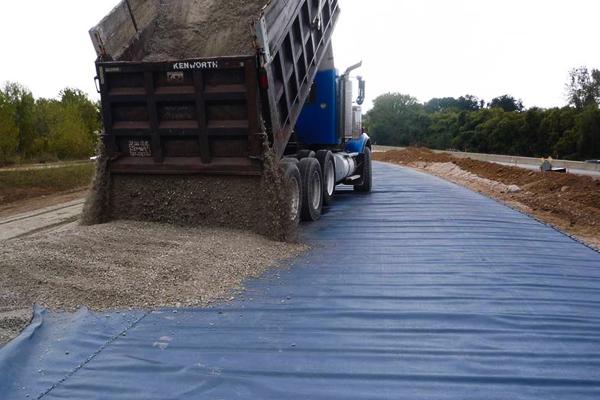 Wet and saturated subgrades can create major construction challenges. The standard geotechnical practice calls for removing such deposits from beneath a pavement structure. However, this is typically not economically feasible. Reinforcing soft subgrade with Mirafi H2Ri provides a “raft” type platform for the roadway that reduces the amount of stress induced upon the subgrade by spreading the load over a broader area.

Mirafi H2Ri wicking/reinforcing geosynthetic is an excellent choice when dealing with wet site conditions. Mirafi H2Ri will provide long term removal of water from the soils adjacent to (both above and below) the Mirafi H2Ri layer. Especially during freeze/thaw or heavy rain events, this benefit can decrease the structure deformations drastically. In recent studies, soil column tests were conducted to compare multiple geotextile types against Mirafi H2Ri. Results showed that Mirafi H2Ri removes 2% to 4% more moisture than the other products. This is important for two reasons: (1) The difference in moisture content distributions in the soil columns is caused by unsaturated water flow induced by suction head difference (capillarity) provided by Mirafi H2Ri. (2) According to Budhu (2008), the undrained shear strength of fine-grained soils can increase about 20% for every 1% reduction in moisture content. This means by using Mirafi H2Ri, the undrained shear strength of soil can be 40% to 80% higher compared with soil treated with the other geosynthetics. 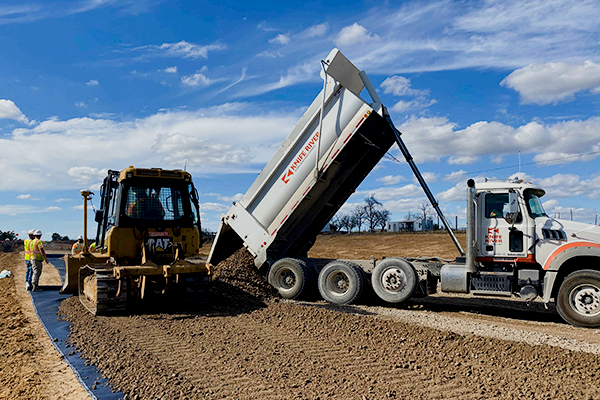 Expansive soils are a recognized problem that plague roadway systems, causing surface deformations due to the swelling and contraction of these soils subject to repeated wetting and drying cycles. This problem is due to the variation in subgrade moisture content. Reducing this variability in moisture content will reduce or eliminate surface distress which is caused by the uneven volume change of the moisture-sensitive soil. In instrumented test sections on State Highway 21 near Austin, researchers found that Mirafi H2Ri reduced the moisture content spread in these types of soils by up to 75% in comparison to soils that were not treated with Mirafi H2Ri. The researchers concluded that “H2Ri appears to have the ability to equilibrate moisture in areas beneath it when there are significant differences in moisture content”.

Mirafi H2Ri’s superior performance, flexibility, and versatility provide an optimum approach to building with geosynthetics. It is the only geosynthetic solution that provides continuous moisture management and enhanced lateral drainage of soil and aggregate materials in addition to providing the conventional functions of separation, filtration, reinforcement, and confinement. Also, this easy-to-install product reduces installation time, providing significant cost savings to contractors and owners.

Save on construction time, minimize the cost of materials and ensure longer-lasting roadway designs.

Take 4 minutes to submit your free Mirafi H2Ri project evaluation. Identify how you can ensure your roadway's long-term success at a lower cost and shorter time than conventional methods.
Learn More
Join our GeoSolutions Innovators community.

Download our free cost comparison card to identify how how much you can save using Mirafi H2Ri. 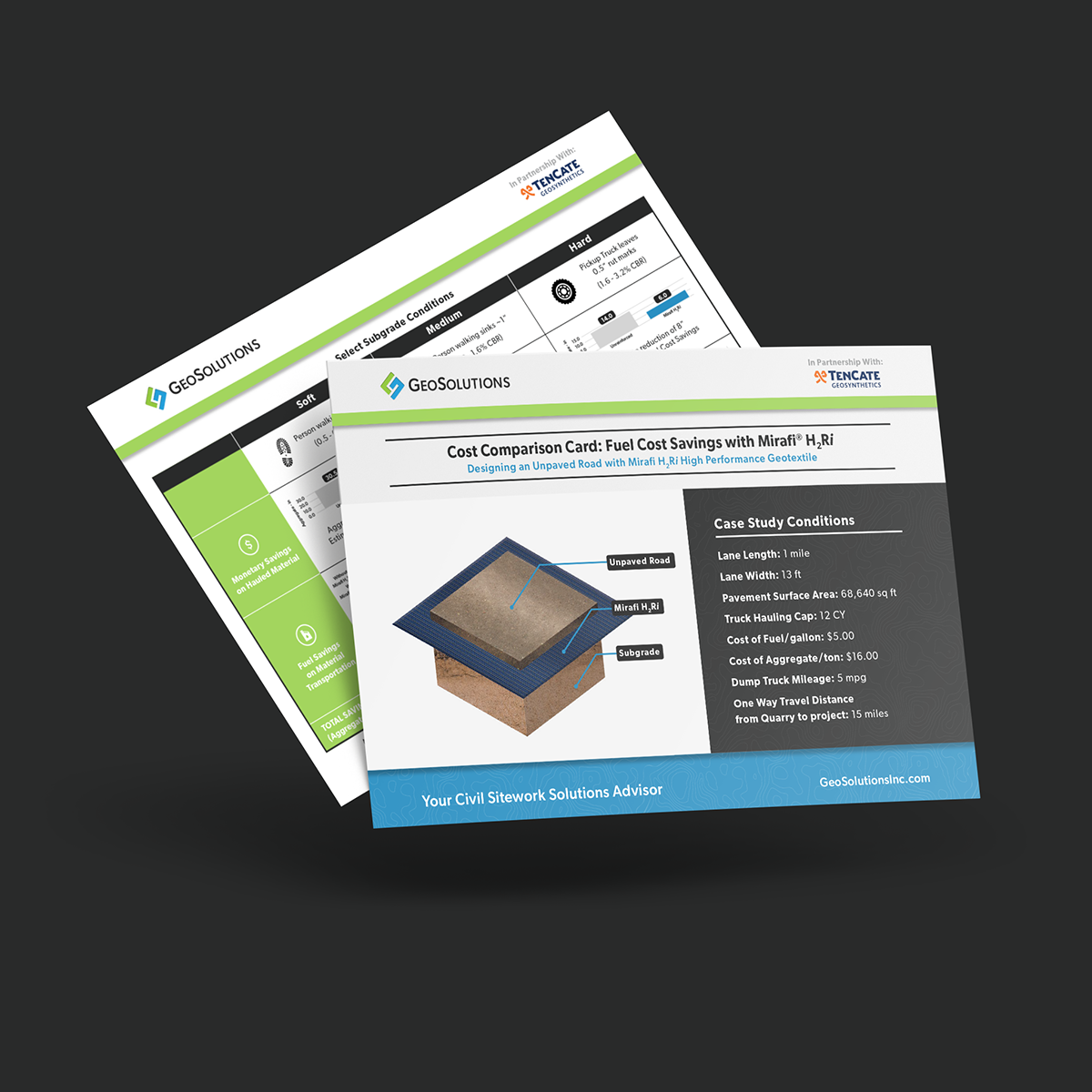